Early diagnosis should have been possible. We needed more time.

I am pretty sure that a more experienced doctor (like our VERY good Dr. Lomb in Toronto) Would have caught both the signs of Pat’s pancreatic cancer and her early strokes (they were NOT migraines as she thought) in early fall. Reading over her diary entries from October 1 to October 12th I certainly see it. Okay I have the hind sight of November’s diagnosis and CAT scans. Such early diagnosis and treatment might have given her longer and allowed our trip to Nova Scotia she so wanted.
Here are the two diary entries I think would have told the tale to a good, experienced doctor like Dr. Lillian Lomb:
Wed, Oct5, 2016
A fine, bright day, cool now (9am). I slept 9 hours last night & feel rested. Yesterday I kept seeing migraine sparkles – think it was b/c of being so exhausted.
[later] Some sparkles, an actual headache (albeit brief) and, once, a sudden wash of numbness through my left hand. ???
Tues, Oct 11, 2016
A cool, fallish day, now vivid bright, now lowering grey. Tai chi, then Pooka to vet for claw clipping & more pills, then some grocery shopping. Also, I proof read some poems for E… for an OAC grant app.
Health watch. I feel stupid recording these symptoms, b/c it seems an exercise in flagrant hypochondria, but here goes: last few days, or week, have been seeing the sparkly lights near my eyes – the ones that look like a crescent of shattered triangular glass bits, often faceted and with faint colours. Also, faint headache. Sounds like migraines, but why would this be bothering me now?
Today, some light headedness/dizziness just after breakfast and in tai chi. Later in the car, a strange, weak feeling in the left arm, with some discomfort up from the elbow. Yet, I had no lack of energy and was able to walk about as usual.
Also, lately, that pain in my chest on the far-right side has been bothering me a lot. Feels like a pulled muscle – there is a burning quality to it. But it comes and goes and seems to have no relation to what I’m doing.
Same with the pain on the left side near the heart, which has more of a pinching or squeezing quality.

I can’t help but think that these symptoms should have told someone something particularly when on October 25th she “felt a rather severe pain below [her] left shoulder blade. It was griping, scrunching pain and lasted about 5 minutes.” This was the third time she felt it. Pat however didn’t tell our doctor about any of this until the pains began to really bother her and she developed a lump in her leg. She went to see our doctor on November 4th and he suspecting a clot sent her to the vein clinic who found blood clots in both legs and sent her to Grand River Hospital where she was prescribed Xarel but nobody put everything together until November 15 when Emergency diagnosed pancreatic cancer stage four.

I’m writing this in hopes my wife’s experience will help others to go to a doctor earlier and not try to diagnose themselves (it wasn’t migraines but minor strokes.) I am not bitter just empty and really sad Pat didn’t get to go to our planned 48th anniversary trip to White Point Beach resort. She died within six weeks of the diagnosis. She left undone so much she wanted to do. Would a diagnosis in early October have allowed treatment and prevented the two serious disabling strokes near the end of November? Would it have given her more time to finish what she wanted to complete? No blame just immense sadness! 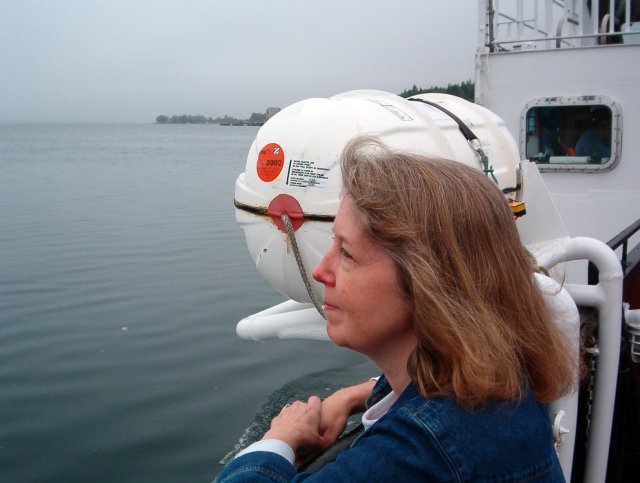 Hi, I am Eric, a retired librarian. I was born in St. Michael's Hospital, Toronto and raised in the downtown area north of the Art Gallery, south of the University of Toronto. I went to Orde Street Public School, Harbord C.I., University College at the UofT and the UofT's Faculty of Library and Information Science. I meet my wife Patricia at FLIS; our first date was on November 15, 1968. We were engaged February 14, 1969 and married on June 21, 1969. Our family includes son, James; daughter-in-law, Erin; (both writers), grand-daughters, Vivian and Eleanor; and Sonic, a very friendly ginger tabby. My beloved wife died January 7, 2017 and our 19 year old cat Pooka died January 8, 2017. I would like to hear from any other class of '63 alumni of Harbord C.I. and class of '67 alumni of UofT's University College.
View all posts by thebows99krug →
This entry was posted in Bow, Patricia A., Family, Grief, Pancreatic cancer, Strokes. Bookmark the permalink.

This site uses Akismet to reduce spam. Learn how your comment data is processed.